If you weren’t able to make it out to the Portland Art Museum last Wednesday, you missed one heck of a party. On the main level several hundred bike lovers milled around, greeted old friends, and laid down plans for future rides. Techs from Bike Gallery chatted riders up about the latest and greatest from the biking world. People stopped by to drool over the new Co-Motion bikes on display. Cycle Oregon merchandise was selling like hot cakes. While anticipation lingered in the air, the overall mood was what can only be described as “huggy”.

Upstairs the band, The Coastline, was cranking out the covers. At 7PM sharp, Executive Director Steve Schulz stepped on stage to give the people what they came here to see. The 2018 events were announced complete with video intros and a taste of the routes for each upcoming ride. 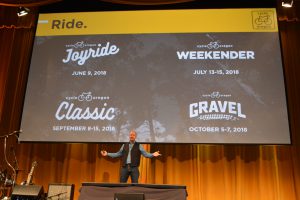 First up was Gravel. This long-teased brand new event will take place in October in the Tillamook State Forest. Next came the always popular women-only ride in wine country – Joyride. Then, to the whooping approval of the crowd, Steve announced that this year’s WEEKENDER will center around the University of Oregon. And finally, the reveal everyone was waiting for – Classic. Eastern Oregon, the Wallawas and The Pendleton Round-Up here we come! And to really drive the point home, members of the Pendleton Round-Up Court, the Happy Canyon Princesses, and members of the board of directors were all on hand to welcome future riders to their proud community.

If you missed the Kickoff, you can catch all the action of the presentation here. 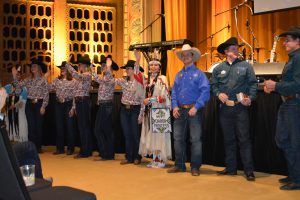